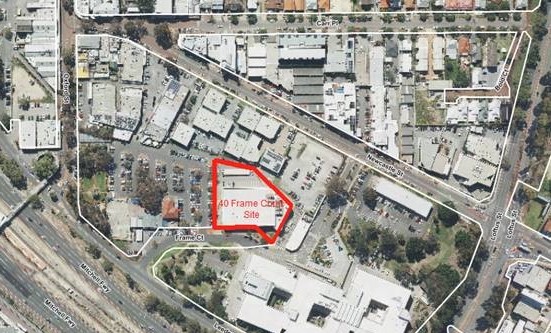 40 Frame Court is a significant proposed development for Leederville. Drawing on years of work on the LC DESIGN Resources, Leederville Connect has compiled the following comments in response to the Proposed Local Development Plan.

Impact on Leederville Character
The proposed towers represent a significant shift in the character of Leederville from a low-mid density town centre to an inner-city high rise. This change impacts in two arena – the height and bulk of the buildings, and what they look and feel like.

Height and Bulk
In Leederville Connect’s opinion, it would not be appropriate to have buildings of this height in the centre of Leederville, however it is acknowledged that the question of height and bulk is being deliberated within Council thru the new Precinct Structure Plan. It is also acknowledged that:
• Past planning decisions have provided for multi-storey development on the adjacent Water Corporation land.
• Leederville can accommodate a “rim” of high buildings along the edge of the Freeway/Loftus St intersection as overshadowing is unlikely to be a major issue.
• Placing the highest tower to the east begins the “step down” in the massing of urban development towards the centre of Leederville along Newcastle St.
• The developer has put a lot of effort into focusing the public’s attention, and the interface with the public realm, on the podium level rather than the towers.

Look and Feel
With respect to look and feel, the appearance of the towers does not capture the essence of Leederville, while they may represent current architectural trends, they:
• Do not thematically integrate with the podium.
• Are too glossy, glassy and “Jetsons”.
• Barricade the residents behind sheets of glass and do not provide opportunities for residents to move out onto balconies and have visual and conversational links to those at ground level or in the other tower.
• There is little opportunity for the apartments to show evidence of human living e.g. plants, drying washing, stacked bicycles, or improvisation and adaptation of living spaces.

It is suggested that the architects and planners look at Leederville Connect’s video (below) about the Leederville Style; particularly from 10:30 where Geoff Warn (former Government Architect in Western Australia) comments about the dangers of generic developments and the need for richness and variety, modesty, artiness, variety, opportunities for people to mix and celebration of difference.

Other comments in this video talk about grunginess and grittiness, lack of completion, authenticity, connection and human focus that characterise Leederville. The towers, as they are currently designed, do not deliver on any of these characteristics.

In summary, the combination of the height and bulk of the development with the appearance of the towers represents a step too far in the change to the character of Leederville. Given that the developer’s interests are on yield, and they are unlikely to want to compromise on this, consequently a significant rethink and redesign of the appearance of the towers is probably in order.

Podium
There has been extensive architectural design work done on the podium level to present a variety of textures and treatments, these, and varied frontages is welcome. Extensive greenery, provided it extends beyond the architectural renders, is also welcome. One jarring feature is the brown staircase that looks like an alienating castle turret and creates a dead space at the pavement level.

Responding to the above point about the impact on the Leederville character, the effort being put into the public face of the podium is seen as a valuable attempt by the developer to offset the impact of the height of this development. It is hoped that this can be refined at the DA stage.

Streetscape and Public Realm
The comments relating to the streetscape and the public realm are similar to those made about the towers. Specifically, that the design represents current landscape architectural trends but does not reflect the character of Leederville.

The parti pivots around the story of bringing the buried wetland to the surface and links this to stormwater disposal. This is supported by Leederville Connect. However, from the perspective of human use and strengthening the public realm the current design is bland, generic and could be seen anywhere.

In our opinion the design of the streetscape and public realm should be driven by the questions – “how many functions that build community use, and make this space fun and safe for kids, can be built into this area?” and “how many opportunities can we build in for repurposing and improvisation of use of this space by the users and, particularly, kids?”

Siting and Streets
The development creates the opportunity to create a grid laneway/street movement structure around the building. This is strongly supported by Leederville Connect, and we also strongly encourage both the Council and Water Corporation to support these initiatives and contribute towards the creation of this movement pattern through the development of adjacent lands under their control.

Community Uses and Benefit
The developer’s commitment to a diversity of users through build to rent, 10% affordable housing and other initiatives, and a willingness to tie the management plan to regulatory approvals, is strongly supported by Leederville Connect. As with other initiatives we see this as an important feature to support the diversity of Leederville and our commitment to equity in our community.

In addition, the provision of two spaces for community purposes at peppercorn rental is also a very welcome innovation.

Two things come from the above. Firstly, if the initiative to create low-cost spaces for community purposes can produce demonstratable benefit to the development and the community, we would like to see this opportunity extend these community purposes into other spaces in the development, particularly the parking spaces identified along the Water Corporation Drain (see 40 Frame Court Local Development Plan 5.6.2), rather than converting these into commercial space.

Secondly, for both the affordable housing and community benefit related initiatives we would like to see this extended further into the future rather than the current framing of “at least ten years”. In the life of the building and the community ten years is a relatively short time and it would be unfortunate if the building is on-sold to another owner that unwinds the community benefit for economic reasons.

Enhanced Environment
The commitment to identify and measure goals for a number of OPL thematic areas is appreciated, however the LDP makes no commitment to decarbonisation, management of waste, providence of materials or better management of water in construction or operation. This is a major failing and detracts from the significant initiatives in other areas, however given the early stage of the detailed design it would be relatively easy to build in such
initiatives.

Leederville Connect is also opening dialogue with the City and other landowners in the Loftus / Newcastle / Oxford / Freeway precinct about creating the area as a world class example of sustainable urbanism. Many of the initiatives to support this objective rely on individual developments being able to connect to precinct energy, water movement and waste hubs. In this context we would recommend that the design of the energy, water and waste infrastructure in the building be such that it can be retrofitted into a precinct scale infrastructure “spine”, most probably using the Water Corporation drain.

To comment on the 40 Frame Court Proposed Local Development Plan, go to https://imagine.vincent.wa.gov.au/40frame and complete the form by 11.50pm 15 June 2021.