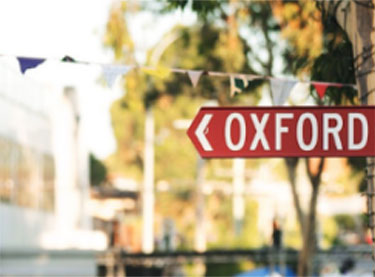 A local's guide to Leederville

Leederville (affectionately dubbed “Leedy” by locals) is where it’s at! Whether you’re after a delicious coffee, a movie (indoor or outdoor), a bit of boutique shopping, dinner in a ‘parklet’, watching the WAFL, or some pampering - Leederville has all this and more.

Located only 3km outside the CBD, our quirky city fringe suburb is bursting with cafes, restaurants, designer fashion boutiques and gift stores, yoga studios and day spas, and a tonne of public art, boasting a gritty personality and charm unlike any other. From the heart of Leederville - intersection of Oxford and Newcastle streets - you can find everything you need within about 7 minutes walking distance.

Dubbed ‘Hipster Heaven’ by Lonely Planet, Leederville always appears on top lists of things to do while visiting Perth, highlighting our independent cinema Luna Leederville or grabbing a ‘conti roll’ at the ReStore.

Getting to Leederville could not be easier with many transport links available, including buses, cycle paths, freeway exits, and the Leederville train station which is only a stone’s throw away from the bustling Oxford Street.

Check out some of our fantastic local businesses below and scroll down to read a little bit of Leederville history. If you want to learn more about Leederville Connect, click here.

A short history of Leederville - the cultural innovator

Nowadays much of Leederville’s unique character is derived from its history. For thousands of years it was a camping and meeting space for the Noongar people, transformed into a food producing settlement then into the cosmopolitan township it is famous for today. Its working class origins of the local community are still evident, physically with many of the original cottages and landmark buildings remaining as they were constructed over 100 years ago. That history, mixed with the influence of cafes, retailers and restaurants established during the 1990s has left it with a unique, vibrant, youthful atmosphere and an authentic character. Leederville has always been a meeting place; a place of work, play, and celebrations. Its history is firmly embedded in its physical landscape and in the values of the community who call it home.

The place of Leederville is part of Boorloo, on the boodja (land) belonging to the Whadjuk people of the Noongar nation. Lake Galup (now known as Lake Monger) was a place of meeting and source of food for Noongar people. The area was settled by William Leeder and John Monger in 1829 as part of the initial Perth settlement colony. By 1838 Leeder had established the Leeder Hotel and by 1868 the area was mostly dominated by food production consisting of market gardens, dairy farming and poultry farms, helping cater for the 10,000 or so convicts in the Perth colony. In May 1875 the area officially became its own municipality called ‘Leederville’ with its first Mayor James Stewart Bennet.

By 1897 the town had its own town hall, primary school, police station, post office, and the beginnings of a tram network. By 1911, Leederville also had its own oval, Leederville oval, and many other recreation and utility facilities including ‘the Perth Water Supply’, constructed on the corner of Loftus and Newcastle Streets, now the Water Corporation. In 1948 a technical trade school was built as a training centre by the army and later became the TAFE.

Since the 1960s and 70s Leederville has had an increasing ‘buzz’, becoming Perth’s ultimate inner city urban village. It’s on the doorstep of the CBD and Northbridge and at the cross-section of the Mitchell Freeway and Graham Farmer Freeway making it a central part of Perth city. A ‘cultural melting pot’ Leederville attracted Perth’s ‘underbelly’ of cultural tastemakers at the cutting edge of cultural trends, from premises such as the Hipe Club claiming it was the first club to play ‘The Doors’ in 1975, Giardini’s and Siena’s the first truly popular Italian restaurants, Luna Cinemas feeding the imagination with cult and underground films.

The 90’s saw the start of the area’s cafe culture when Cafe 130 opened its doors it was one of the first independent cafes pre-dating a coffee explosion across Perth. The first and original Sayers opened in Leederville before its sister and little brother opened in other parts of Perth. Then came along ‘The Manor’ the first ‘dance club playing hip-hop music instead of dance anthems with a premium cocktail offering’ caught Perth’s imagination which has been repeated over and over in outer (and inner) suburbs.

Public art can be seen at every turn. Leederville was involved in one of the earliest ‘PUBLIC’ festivals presented by FORM, resulting in numerous murals commissioned for then blank walls around the town centre. More and more art and creativity pops up all the time - restaurants, bars, and even the supermarket have turned empty spaces into bursts of colour. Even the community services nearby have embraced the arty side of Leederville with the YMCA and Foyer Oxford both dressed up with street art and murals. Leederville is a cultural innovator as history clearly attests.